The Firewood Information You Need to Know

Many people are turning to firewood for heat who haven’t done so in the past, and as one of Maine’s family-owned firewood producers, Day Logging is happy to help folks learn the ropes and get started. In this beginner’s guide to everything you should know about firewood, we’ll cover all the basics you need to know to effectively purchase, store, and use firewood to heat your home in New England. 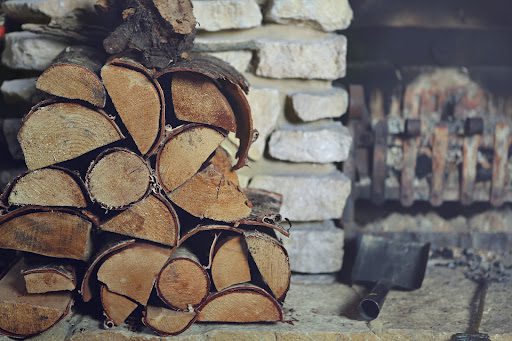 If you’re shopping for firewood, you’ve undoubtedly encountered some common firewood terms.  For some, these terms are very familiar. For others, who have only recently turned to firewood as an alternative to oil or electric heat, these terms are confusing and strange jargon that makes buying the right amount and type of firewood more challenging than necessary.  Here are some common terms and an explanation of what they mean.

A cord is a measurement traditionally used to measure firewood equivalent to 128 cubic feet.  Normally this means a stack that’s 4’ wide, 8’ long, and 4’ high.  Firewood is usually sold by the cord or in fractions of a cord, such as ⅓ or ½.  Sometimes a ⅓ of a cord is called a “face cord.”

Hardwood comes from deciduous trees.  Hardwood is known for producing relatively little ash and smoke compared to softwood and is usually preferred for indoor burning.

Softwood comes from coniferous trees.  Softwood is known for producing more ash and smoke than hardwoods.  It’s well-suited to outdoor recreational fires or in high-temperature wood furnaces that do a better job of burning the softwood entirely, with little creosote build-up.

Green firewood has been recently split and has not been dried yet. This isn’t suited for immediate use because it contains too much moisture to burn well.  It’s almost always cheaper than seasoned or kiln-dried wood, but you’ll need to dry it yourself before using it as fuel.  We’ll provide some tips on stacking your firewood so it will dry effectively.

Seasoned firewood has been dried for use, usually between 6 and 18 months.  Seasoning firewood for six months gets it dry enough to use indoors for heat, though it will continue to dry out if properly stacked and sheltered with diminishing returns. To get drier wood, you need Kiln-dried firewood.

Kiln-dried firewood has been dried using heat and air circulation over the course of just a few days. This is the driest firewood available on the market. It burns hotter and more efficiently than seasoned firewood.  It’s also generally a little more expensive than seasoned wood. 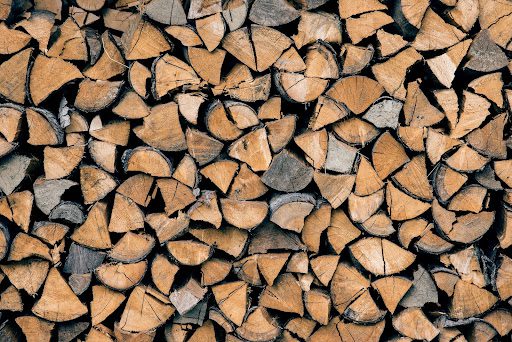 The Differences Between Types of Firewood

Here we’ll go into a little more detail about the differences between hardwood and softwood as well as seasoned and kiln-dried firewood.

When both are properly dried out, the biggest difference between a hardwood and a softwood firewood is how long it burns. Wood fibers in hardwood are more densely packed, which results in a log the same size as a softwood log burning for longer and usually hotter. Remember, firewood is sold by the cord, so the more energy-dense the wood is, the better the value.

There’s a pervasive piece of old wisdom that softwood also creates more creosote.  This is one of those oversimplified semi-true sayings that never quite stops being repeated.  Creosote is primarily a result of an inefficient burn, which means it’s the result of lower-temperature fires.  Since softwoods tend to burn less hot, they do, technically, tend to create more creosote on average.  However, modern wood furnaces are designed to get to much higher temperatures than old-fashioned wood-burning stoves.  This drastically reduces creosote buildup since the fire is burning much hotter.

Both seasoned and kiln-dried firewood are high-quality solid fuels for wood-burning furnaces or stove systems.  The biggest differences are in their relative cost and performance, which are small but not negligible.

Seasoned firewood is allowed to dry naturally, and stacked for airflow to wick away moisture over time, usually at least six months.  This process is reliant on weather conditions and can result in uneven drying. While all the seasoned firewood should be plenty dry to burn, it won’t all be equally dry, meaning there may be a bit of guesswork involved in figuring out how much wood you need to provide the heat you require.

Kiln-dried firewood is heated and has an artificial airflow imposed using convection fans to very quickly and evenly dry out.  This is typically done in very large purpose-built buildings over the course of just a few days to a week.  The even drying means there’s more consistency between logs, and kiln-dried firewood is also typically significantly drier than seasoned wood, allowing it to burn hotter since energy isn’t lost to boiling off moisture.

Which is right for you depends on your situation, but generally, the increased cost of kiln-dried wood is in line with its increased utility, making it the best choice if you have limited storage space.  On the other hand, if you have a lot of storage space, you can continue to dry seasoned firewood (or green firewood, for that matter) over time, eventually getting it nearly as dry at a lower cost. 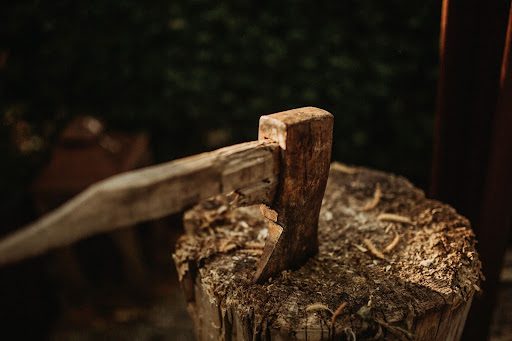 What Other Firewood Information Should You Know?

While we’ve covered all the basics above, there are a few tips we want to make sure to cover.

Buy By the Cord

Some sellers will offer a “rick” or a “truckload” of firewood, but these aren’t standard measurements, and the reality may be significantly different from your expectations when placing an order.  Cords are the industry standard for bulk firewood orders and are significantly more standard and reliable.

How To Spot Well-Seasoned Firewood

Seasoned firewood that’s well-dried will show signs of cracking on the ends, and the bark should be peeling away a bit or falling off as they get nicely dried.

How to Store Firewood

There are two typical approaches to storing firewood.  Either firewood is fully dry and stored in a shed or other container safe from the elements.  The other approach is to stack wood so that it keeps drying in the open.  Using a tarp to block out rain and snow above the stack and stacking so that there is great airflow and the wood dries over time.

As one of the bigger firewood producers in Maine, you won’t be surprised to learn that we’ve written about firewood before; several of these cover topics we touch on here in more detail, too.

As a trusted Maine firewood producer and wholesaler, Day Logging is ready to help you prepare for this winter with top-quality firewood. We offer green, seasoned, and kiln-dried firewood with delivery within our range.  Give us a call today to learn more about pricing, delivery timeline, and out range, today.